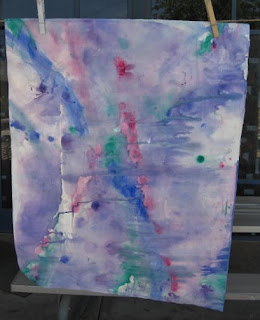 My last blog was all about creating with paste paper.On the left is one of my pages. I like the filmy watercolor look it has.Here is  my own version of  a haiku  poem about the experience.
Gliding over wet paper
Colors float in fluid paste
Slowly art emerging.

Next step: create the book. 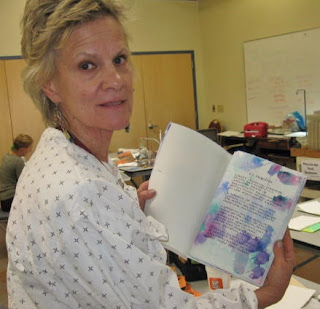 The large sheet of paper is folded, torn into four sections with deckle edges, those lovely,ragged borders on handmade paper. Fold and score the paper, then tear it over a hard edge.The book can be horizontal, or vertical in shape, depending on the artist's vision. I chose the taller size to fit my own verse.
Essentially one paper, painted on both sides, folds and becomes four pages. There is a good reason to pick the same colors and  painting style for some sense of continuity. However, expect the unexpected! I included some plain sheets and rice paper for contrast and a different  writing surface.
This open page I am showing is all written in the uncial style of calligraphy.I liked its linear quality for this poem. I  wrote with watercolors  that echoed  those of the paste paper page. I cut out  windows to showcase words; added  designs to decorate; things to make me smile. Finally, the sheets were sewn together into a book of sixteen pages, plus cover.
Every page is a surprise when using paste paper and poetry.
Posted by V. Norton at 5:00 PM 1 comment: 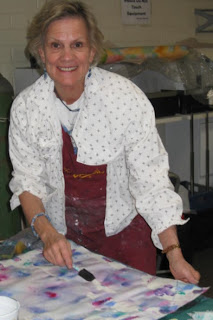 I spent the weekend in the wonderful world of decorating my own paper. Paste paper to be specific. My transformed pages became the basis of a book, filled  with my own poetry. I was inspired by both where I was, and what I was doing. My verse was all done in calligraphy.
I  started out  with  lovely blank sheets of good quality paper, Arches text wove was the choice. Next comes the fun of choosing colors. Liquid acrylic paint works the  best. Three or four colors are enough to make a finished book. I chose a blue, green, and magenta red.  Plus a  purple evolves when the red and blue overlap. I found a glitter white I added to the mix. Always good to soften the colors,and what joy to have a hint of sparkle.
Using  good quality paint is worth it for blending and consistency. You do get what you pay for. The liquid form is easiest to mix. Next comes the mixing of the paint and the paste. Formerly I have used a home made paste of  flour blended with the paint in a certain ratio. Nowadays, there is a prepared mixture to blend. It saves on  the fuss and mess, but I kind of miss the purity of starting from scratch.
Then the fun begins. The paper gets moistened, and  the paint applied. Paint brushes are good tools, so are cut up sponges. There are those that liken it to finger painting.It is good to loosen up. I found it fun to use like watercolor. As I manipulated  the paper, paint would run and give a dripped quality that appealed to me at that moment. It is also intriguing  to use stencils, or draw designs in the wet paint.
I did four sheets. Keeping them all in the same hues created  an automatic harmony and cohesiveness from page to page.Very important for the next step. Stay tuned.... 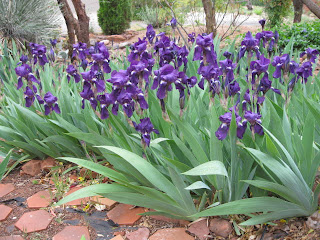 It is springtime in Sedona. The cold front came with the wind and rain. Then it moved on, and the sun started shining.  Outside of my studio are blooming the luscious,  purple, bearded Iris shown in this  picture.
In Greek mythology, Iris was the goddess of the rainbow, attendant of Zeus and Hera. When you look inside of the flower, there are different layers of  purples, the light and dark,the whites, and the yellows. That is often the case with  colors, certainly  in my own arts of ceramics and calligraphy with watercolor.
Your first view often sees the one dominant hue. When you get up closer to the paint, or the  glazed surface, often there are layers inside that reveal themselves to the viewer. That is one of the fascinations of the creative process. And no one does it better than Mother Nature.
Posted by V. Norton at 11:18 AM No comments: 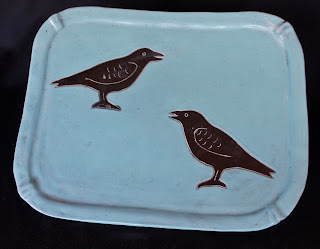 It is a beautiful day with blue skies  and birds flying over head. Not just any birds, but specifically the Corvus Corax, which we know as the Common Raven.This platter I created is called " Two Ravens". It is ten by fourteen inches in size. A nice size platter.  There is a crackle in the blue glaze caused by the primitive, low fire technique I like to  use when creating
my" Critter folk art". It is  a  functional plate, but quite decorative as well. I am  drawn to the magic of this handsome and intelligent bird.
Many of the Native peoples in the northwest carve them onto  on their totem poles, out of respect. I  saw a lot of that when I was travelling in Alaska. They normally travel in pairs, or small groups.We are familiar with their deep croaking call, although that is not the only sound they make. They are often seen here in northern Arizona.
Once, years ago, I looked out my window and saw Ravens flying together over Cathedral Rock. More and more of them kept appearing, until I counted fifty of them swirling and soaring in the winds.I cannot explain this nor have I ever seen it since, but it was an awesome sight. Perhaps Raven is a special bird for me. Certainly I like to make them appear on my ceramic art.