A Stay in Cherry, AZ 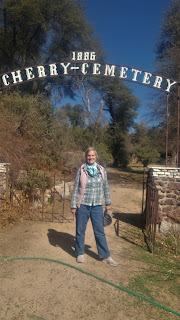 Here I am standing in front of the  cemetery in the mountains  near Prescott, AZ. I was camping with two friends and we took  a  3 mile derive into what is technically  downtown Cherry AZ.   I have seen it listed as a ghost town, but with the graveyard, volunteer fire department, a bed and breakfast, and vacation homes,  it is still alive. When you camp, you better bring Everything, because there are No stores in Cherry, so named for the cherry tress growing near the creek. It gets cold up there at 5,200 feet, where we camped .
It served as a stage stop between Fort Whipple( now the VA hospital in Prescott )  and Camp Verde, AZ. There was a post office established in 1884, a school in 1898, a general store and some saloons, no doubt. At one point it had a population of up to 400 people. There were six mills to process the gold, silver, copper and lead pulled out of that area.  When you hike around you can still find old  abandoned mines. But the ore played out, and Jerome became the  next bonanza in the area. Finally in 1943 the Post office was closed. But if you want more  history, walk into the cemetery and look at names and dates. Quite a few stones marked "Baby". I enjoyed being there. Comments?